Child abduction is an unimaginable event, one that a SOS Security team faced recently.

The day started like any other, until an SOS Security officer witnessed a female run-up behind a mother and her child and attempt to pull the boy from her hand. The mother resisted and was punched in the mouth by the assailant. Senior Officer Stephenson witnessed the event from afar and quickly radioed a description of the assailant and her direction of flight, alerting other officers to the situation.

Senior Officer Santos, aided by Officer Brennan, saw the assailant fleeing and began their chase. Officer Santos discovered the perpetrator hiding and maintained observation until authorities arrived. The New York Police Department apprehended the assailant and admitted her to the hospital for evaluation and medical attention.

Joined by the client and Chairman & CEO Edward B. Silverman, CPP, Officer Santos was recognized for his heroism and keeping a family together. 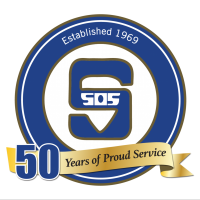